When the HMS CRANE Association regrettably had to close down in 2018 due to falling numbers and increasing age of its membership, its assets by way of models and memorabilia were distributed to several organisations with links to the ship, notably Tower Hamlets Borough Council, which had replaced Bethnel Green, wartime sponsors of the ship, and Marshland Maritime Museum. Naval Charities were also beneficiaries

HMS CRANE was a Modified Black Swan Class Sloop, pennant number U23, launched in November 1942. She represented the cutting edge of Anti-Submarine warfare at that time, being fast, heavily-armed and equipped with advanced radar and sonar detection equipment. HMS CRANE was adopted by the Borough of Bethnel Green during Warship Week in 1943.

She served throughout WW2 in the Atlantic, Mediterranean (covering Operation HUSKY, the landings in Sicily), Normandy landings, Far East (defending the supply ships of the Fleet Train as the combined American, British and Dutch fleet closed in on Japan). Together with another consort she sank two U-Boats: U538 off South West Ireland in 1943 and U962 off Finisterre in 1944.

She went into reserve in 1946 but in 1951 was re-commissioned as Leader of the 3rd Frigate Squadron for service in the Far East with the pennant number F123.  She joined UN Forces in the Korean War in 1953-55 and fired 1756 rounds of 4 inch High Explosive shells during the blockade of the west coast.

CRANE was deployed to the Red Sea for the Suez campaign (Operation Musketeer, 1956), where she shot down one and damaged two other Israeli jet aircraft which had attacked her due to mistaken identity. However she was damaged by their rockets and cannon shell, as a result of which she had a long refit and modernisation in Singapore before resuming patrols covering the South China Seas, Maldives, Borneo, Japan and Australia.

The design of the Black Swan Class had evolved from the Minesweeper Sloops of the 1920’s and 30’s, themselves traceable to the Flower Class of WW1. 45 Black Swan Sloops were built for the Royal Navy and Royal Indian Navy during the late 1930’s and 40’s and others were cancelled at the end of the war. The “Modified” design had small changes to dimensions but more powerful turbines, enabling them to steam at 20 knots.

Anti-aircraft armament was updated throughout her life from the original fit of 4 x 2 pounder pompoms and a quadruple 0.5 inch machine gun, improved to six x twin Oerlikon 20mm mountings which were replaced during the Korean  War by two twin and six single 40mm Bofors 40/60 AA mountings.

In 1951 a “split” Hedgehog anti-submarine mortar was fitted either side of B turret, which also had 3-inch illumination rocket rails fitted to the gunshield. As late as 1960 IFF [Identification Friend or Foe] was added to her air guard, surface and navigational radars.

Her sonar equipment was a 144/164 set which gave range and bearing of submarines, typically out to 2700 yards and a 174 depth finder accurate on targets up to 200 ft deep. This combination could fire the Hedgehog mortar automatically at optimum predicted ranges; placing 24 x 80 pound contact-fuzed bombs in an ellipse around a target submarine 375 yards ahead of the ship. Depth charges required the attacking ship to pass directly over the submarine but even a near miss could be fatal.

During the Battle of the Atlantic Black Swan sloops operated as Hunter Killer Groups, not tied to defence of convoys but proactively searching for U-boats in the areas where they congregated i.e. near their bases in the Bay of Biscay and in mid-Atlantic where convoy routes to and from North America crossed. For much of the war this area was beyond the reach of land-based aircraft.

HMS CRANE was the last of the Black Swans to be operational in the Royal Navy, being paid off in 1962. At that time, although being by far the oldest warship in the Far East Fleet, CRANE was the most heavily-armed warship after the flagship, the cruiser BELFAST.

The HMS CRANE Association adopted two chicks at Slimbridge Wetand Wildlife Centre  as part of their successfu Great Crane project to re-introduce the species to the wild in England. Henry VIII and his gluttonous friends having hunted it to extinction. We named the two chicks Jack Tar and Suzie Wong, appropriate to our memories of adventures in the Wanchai area of Hong Kong long ago. As the birds grew older, Jack turned out to be a Jacqueline, but sailors have always been broad-minded about that sort of thing, so we continued to visit them. Our latest news is that Suzie has hatched a chick but Jacqueline is still flirting with the bigger boys ...

Click on the images in the Gallery below to see a slide show of larger photographs, with captions. 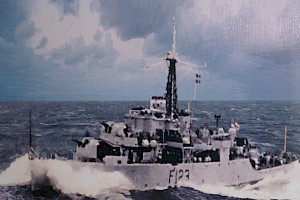 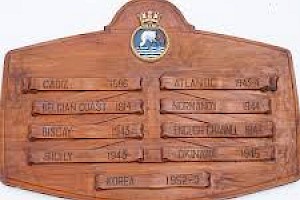 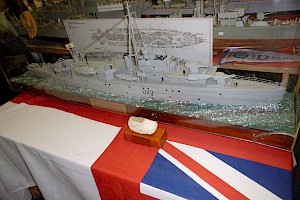 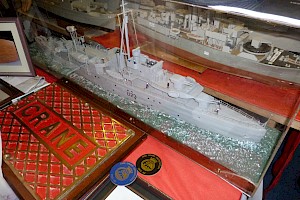 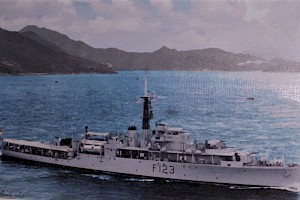 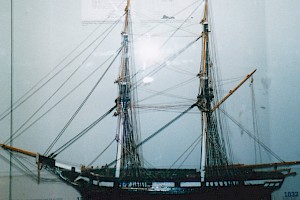 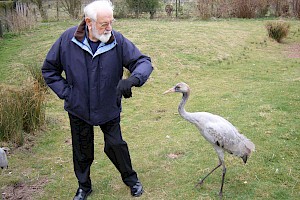 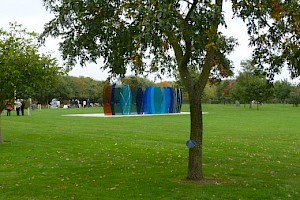 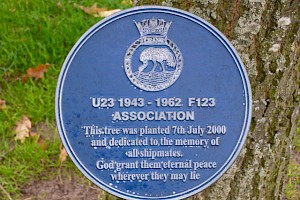